CharityWatch, founded more than 20 years ago as the American Institute of Philanthropy (AIP), is America’s most independent,
assertive charity watchdog. CharityWatch does not merely repeat what a charity reports using simplistic or automated formulas. We dive deep to let you know how efficiently a charity will use your donation to fund the programs you want to support. CharityWatch exposes nonprofit abuses and advocates for your interests as a donor.

Founded in 2001, Charity Navigator has become the nation’s largest and most-utilized evaluator of charities. In our quest to help donors, our team of professional analysts has examined tens of thousands of non-profit financial documents. We’ve used this knowledge to develop an unbiased, objective, numbers-based rating system to assess over 8,000 of America’s best-known and some lesser known, but worthy, charities. 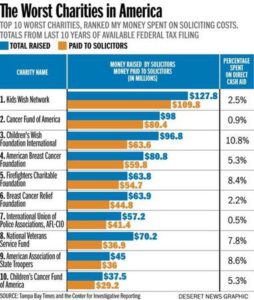